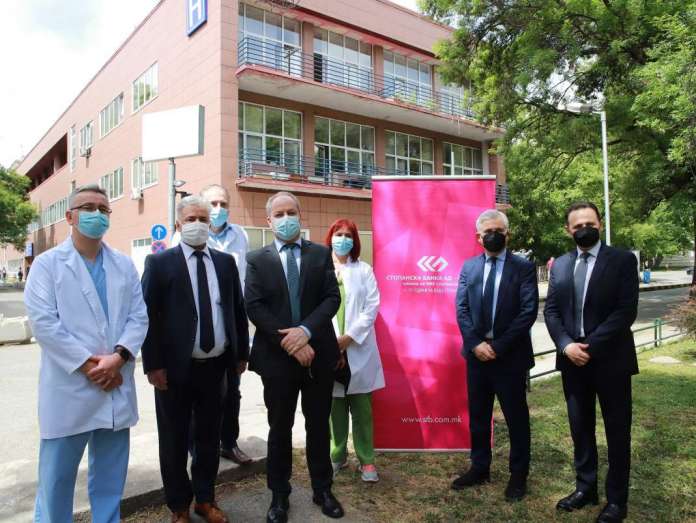 The University Clinic for Surgical Diseases “St. Naum Ohridski ”in Skopje is an important surgical center which in pandemic conditions and transformation of a large part of the hospital facilities into COVID centers, played even more intensive, important role in the public health.

Stopanska Banka AD – Skopje, following the donation of the ultrasound device intended for surgical procedures in 2019, today initiated a procedure for donation of additional surgical and laparoscopic equipment for the Clinic which improves the capacity and provides long-term support for the growing number of patients who unreservedly receive the services of the Clinic every year.

The Bank links the current Winning Game with payment cards with this donation, intending to increase the awareness of the health benefits of using payment cards instead of cash by increasing the secured non-cash payments, and to support the health system additionally. Thus, the community gains multiple advantages, especially in pandemic situation, through the individual and collective care that the Bank regularly encourages.

At the press event announcing the donation, Mr. Diomidis Nikoletopoulos, the Chief Executive Officer and the Chairman of the Board of Directors of Stopanska Banka AD – Skopje, and the Medical Director of PHI “St. Naum Ohridski ” MD Ljuben Arsenkov gave their statements.

Mr. Nikoletopoulos: “The Clinic St. Naum Ohridski” has a special place in the community and is of a great importance for the public health. We In Stopanska Banka, encouraged by the efforts and hard work, but also by the high professionalism of the health workers from this Clinic, continuously provide the assistance through various donations, thus justifying the meaning of our slogan On your side.

Stopanska Banka AD – Skopje, as one of the strongest banks in the country and one of the regional banks with the best performances will always be on the side of the citizens, not only with the offer of top financial services, but also with the support for the whole community, through socially responsible practices and with a significant budget, as well.”

Mr. Arsenkov: “They say that friends are recognized during difficult times. Today, our friends Mr. Diomidis Nikoletopoulos, Chief Executive Officer together with his team from Stopanska Banka AD – Skopje, visited our clinic and shared with us the good news about the donation of instruments for performing laparoscopic surgical treatment. Out of the total of 2,500 operations performed during the last year, about 600 of them were exactly performed laparoscopically where this type of instruments were used. On behalf of all employees, on behalf of the Economic Director of the Clinic, Mrs. Nermin Shakiri and on my own behalf, I would like to thank them for the donation that is in the process of realization. I want to emphasize that this donation is a continuation of the cooperation with Stopanska Banka, as an extremely socially responsible company that previously donated an ultrasound device, also intended for the needs in the operational unit. During the pandemic period, when all resources are directed to treatment of Covid patients, socially responsible companies such as Stopanska Banka, in addition to supporting the pandemic control system, have a highly developed sense that every segment of the medical system is important. “Through the realization of today’s donation, a message of social responsibility is actually sent in real time, in a time of pandemic, because it facilitates the treatment of patients with surgical diseases who need timely and adequate treatment.”

Re-Cap of the Global Forum on Economic Recovery

Welcome to our new member – VARUS

45,000 tons of packaging waste per year recycled by PAKOMAK